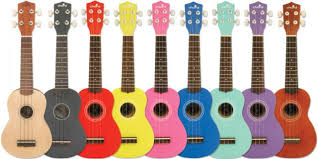 The ukulele has come a long way since Tiny Tim’s 1968 “Tiptoe Through the Tulips”.

For generations this four stringed, two octave range, diminutive member of the guitar family was the most deeply unfashionable instrument you could ever think of, with the exception of the recorder (and let us hope the recorder may stay this way). Mainstay of the school orchestra and Hula night parties, the ukulele was a lovely word to say but too often an instrument too cute and in the wrong hands too awful to listen to.

It’s hard to pinpoint when the ukulele’s resurgence began, but musical historians think 1999 is most likely.

That was the year that Hawaiian musician Israel Kamakawiwo’ole’s ukulele version of “Over the Rainbow” was used in a ubiquitous commercial and captured the world’s heart. If you’ve been to any weddings recently you probably have heard it. Israel was a huge star and the song remains a favourite, racking up 115 million hits on YouTube alone.

It was also around that time that the ukulele started featuring as a new sound on indie music albums, and instead of being the accoutrement of stand-up comics that made you gag, the modern day hipsters, the style setters, the in-crowd seized it by the neck and made it seriously cool and edgy. It’s never looked back.

For baby boomers, the ukulele carries a whiff of nostalgia.For the surf crowd, it’s as hip as hula.

For the fashionistas it can do whatever you want it to do.

“The attraction then, you know, as a complete and utter outsider instrument, which was delightful to us, and then to realise that you could do anything and everything you wanted on it… It’s a great instrument to play; it’s very empowering because it’s easy to pick up and learn quickly –  it’s harder to play well, but you can teach someone to play a couple of songs in 10 minutes. When we first started there was nobody – literally nobody under 55 who played the ukulele,” says Hester Goodman of the wildly successful Ukulele Orchestra of Great Britain which used to do 200 shows a year, but has cut it down to around 120 shows because of a hectic international touring schedule.

The Ukes brought the ukulele to the Proms and they’ve played repeat concerts at the Royal Albert Hall, Sydney Opera House, Carnegie Hall, Svalbard, The Vienna Opera House, Glastonbury Festival, and the Assembly Hall in Tunbridge Wells as well

as the local pub.

Their publicity material promises to take audiences on a world tour with only hand luggage and “One Plucking Thing After Another” as it travels  from Tchaikovsky to Nirvana via Otis Redding and Spaghetti Western soundtracks.

The uking of the world is reaching a crescendo.

You can easily join the clamour. In fact every home should have a ukulele now.

Millions of ukuleles are sold each year in fashion colours and designs. I’ve been known to traipse around music stores across Europe with my musician husband looking for the perfectly resonant ukulele, the traveller’s perfect companion – light, portable, simple but satisfying to play and found in a moody blue shade of aubergine. It proudly sits alongside bigger acoustic and electric guitars where it too can rock and roll with the best of them.

Ukuleles are accessible to even the musically challenged and for those wanting to learn the Ukulele for Dummies guide book is but a click away or you can download numerous  online tutorials or have eye contact and take your ukulele along to a group or private tuition class.

There are even more social ways to learn with thousands of sing-along uke groups, home strumming clubs to join like you would a book club, but you get to choose a song to learn, and mass ukulele events and conventions to attend at home and abroad. This could be just the instrument to release your inner performer and add a new string to your bow so to speak. It would complement, indeed enhance, choir membership with a guaranteed following of friends and family at every public concert.

Festivals for ukulele lovers are big.

The NZ Ukulele Festival is one of the biggest events of its kind in the world.  Last year a record crowd of over 13,000 gathered in Auckland to enjoy non-stop entertainment from international and local musicians and to make music together.

The festival showcased the Kiwileles, a massed ukulele orchestra of thousands, along with continuous workshops tailored to all levels and ages, industry stalls, great food, competitions, giveaways and the annual “Great Kiwi Uke-Along” – an epic strum and sing of kiwi music! Sign me up.

There’s a growing ukulele discography to buy and a concert circuit of artists and virtuosos of all persuasions and musical genres to go and hear as well as a host of exceptional world-class orchestras and ensembles who do things with a ukulele you can only have dreamed of.

It’s hard to believe that what critics still call the “nasty little low-born Portuguese sailor’s instrument” has warranted a place at the Proms, starred on major network talk and entertainment shows, wins awards, and has an ever growing fan base.

The Canadian ukulele virtuoso, James Hill was one of the overseas star acts at NZ’s Ukulele Festival. His version of Michael Jackson’s Billie Jean has clocking up more than 800,000 views on YouTube and he’s credited with taking what is sometimes still spurned as a children’s play-thing, to a new level.

“I’ve never been a really lucky person, but the whole ukulele thing is the first time in my life that I have been the right guy at the right time with the right skills,” he says. 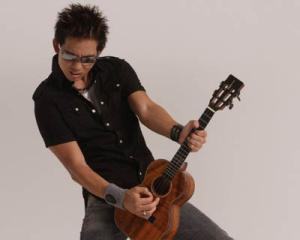 Jake Shimabukuro is a world ambassador for the ukulele, filling concert halls across America — and in Japan, Singapore, Russia and Brazil.

His pipsqueak instrument’s popularity in those far-flung places, he said, “really has been blowing my mind.”

“If everyone played the ukulele, the world would be a better place…There’s something about the ukulele that just makes you smile. It makes you let your guard down. It brings out the child in all of us.”

Jake Shimabukuro’s extraordinary recordings of While My Guitar Gently Weeps and Queen’s Bohemian Rhapsody have made him a star.

In his hands I could be convinced that the ukulele could indeed be the instrument of peace.