“The toilet is a part of the history of human hygiene which is a critical chapter in the growth of civilisation.”

When I was little my big brother and I did “did”.

“Did you?” my mother would ask.

“Did,” we replied and glowed in the praise of being a treasure.

When I became a mother, I too celebrated the growing up milestone of my little daughter as she proudly ditched the pull-ups and sat on her potty, thumbing through “Winnie and the Pooh”. She too was a treasure though it took many years for her to lose the ‘and’. I blame my mother. She gave her the potty and book at the same time so they inextricably moved together, even when she graduated to the big, pink porcelain toilet.

Our bathroom was lovely, a clean, fragrant, comfortable refuge, with a value-add bidet to buff the bottom, wash the baby and socks in and provide a fitting hideaway for the cat to nap in.

In the developed world we have high expectations of what a toilet and toileting experience should and should not be.

Imagine if Wimbledon champion Novak Djokovic had had a phewy loo experience during a comfort stop, reportedly for a self-administered pep talk while staring at the toilet seat, in his final against Roger Federer. He would have lost more than his poise. Instead he came back with a roar in a win that he could truly treasure.

We can – and love – to share horror stories of toilets we’ve been to where we had to pay to get in and would pay anything to get out of.

We’ve learned to be prepared when away from the commodious lavatories we trust. During a visit to Rajasthan, I inveigled my family to pocket toilet rolls at every opportunity to cater for our dire needs. And did they thank me? We arrived in the sanitised city of Singapore, flush with 17 virgin rolls of non-absorbent, 2-ply sheets in vicious pink and nothing to declare.

We’ve all suffered the inconvenience of having the wrong coin for the slot, the toilet with no paper, the broken lock and the door that bit too much of a stretch to push securely closed from a seated position.

We’ve all looked aghast at what we’ve left on the Dutch shelf or what’s been left by people with no aim.

We’ve held our breath in squiffy French loos even when we thought it would be the prices that left us gagging, focused mind over matter to straddle the squat, wished we’d removed our mobile phones before the splash in the long drop and even mastered the Japanese high tech commode without being electrocuted and prematurely washed and dried with a blood sugar urine reading print out thrown in with the hand wash.

But there are well over 1 billion people worldwide who are open defecators, not by choice like inconsiderate freedom campers, but out of necessity because they have no access to proper sanitation.

India has at least 600 million people, the World Health Organisation says, who “continue to defecate in gutters, behind bushes or in open water bodies, with no dignity or privacy”.

How do you deal with an estimated 900 million litres of urine and 135 million kilogrammes of faecal matter per day with totally inadequate systems for its collection and disposal?

It’s hazardous, not only because of the risk of diseases such as diarrhoea and hepatitis but especially so for women who use the outdoors to relieve themselves and are in danger of sexual assault. Recently two teenage girls from the state of Uttar Pradesh were gang-raped and found hanging from a tree after they left their village home to go to the toilet. Their house, like hundreds of millions of others in the country, did not have any facilities. In fact, more Indians have a mobile phone than a toilet!

So while India has rapidly developed into an IT leader and the call centre of the world, the call of nature has not been answered despite India’s politicians tackling the national toilet problem in their own way for years and years.

It is most unlikely that any political party in the western world will need to make a stand on toilets – except the Greens who may want to promote environmentally friendly, waste eating toilets and bio-gas generation plants as compulsory for all new house builds. 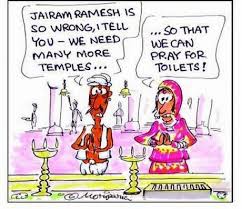 The Times of India

But the promise to wipe out open defecation for good was a major platform for both the Congress and the Bharatiya Janata Party (BJP) in the 2014 Indian general election.

Building toilets in every village, in every household, is only part of the answer in a society where open defecation is as normal as learning to walk and cleanliness is godliness.

You can lead a horse to water but you can’t make it drink as they say and honestly who would ever change a habit of a lifetime to use a toilet which looks and smells like a contagion.

Dr Bindeshwar Pathak, the internationally respected, crusading founder of the Sulabh Sanitation Movement and the Sulabh International Museum of Toilets (http://www.sulabhtoiletmuseum.org/old/index.html), says “the toilet is as important, if not more so, than other social challenges like literacy, poverty, education and employment.

And there you have it: the bottom line.