Trevor Mallard is out for a duck.

The punchy Kiwi politician with a fast mouth, a furled fist for a nose and newly honed muscles to show off in tight cap-sleeved tee shirts is no bird brain. But his latest grand idea hasn’t taken wing. Mallard wants to raise the dead.

He wants to be the herald of a new dawn and bring back the Moa, New Zealand’s flightless, feathered giant, seen in movies, animated 3D malls and in landscaped clumps of concrete statues outside Auckland airport, gateway to New Zealand, and tourist traps.

The tallest bird that ever lived, some with legs built like an elephant, some that laid an egg the size of a rugby ball and some the size of turkeys, all thrived and multiplied in New Zealand’s untouched world without a predator in sight for millions of years. And then came man.

“First we killed them, then we ate them and then we forgot about them,” writes Quinn Berentson in Moa: The life and death of New Zealand’s legendary bird (Craig Potton Publishing 2012 http://www.craigpotton.co.nz).

Great read, but steady on Quinn, don’t include me in your “we”. The moa has been no more for a long time. This is the age of sustainability, conservation and de-extinction, particularly for politicians wanting to come back from the brink of oblivion which brings us back to Trevor Mallard and his brave new world.

Striding through parliament’s Press Gallery, with photos of him cuddling a kiwi (the feathered and flightless national bird of New Zealand as opposed to a person), illustrations of the Spanish bucardo ibex and the gastric-brooding frog in Australia and armed with his homework on how DNA retrieved from skeletal remains could be used for the Immaculate Conception to recreate the Moa.

Not beating about the bush, the first in line for the 21st century throng of moas would be his home electorate, Wainouiomata, the new “Galapagos of the nation,” as one pundit described it.

Filled with great expectations of the speed of science to hurry along the second coming and prolong his own longevity and undeterred by the dismal results of the attempts to bring back the ibex and gastric-brooding frog, and damp squib scientists determining there was insufficient DNA to trace the genetic code of the moa, he still hove to, mouth first. 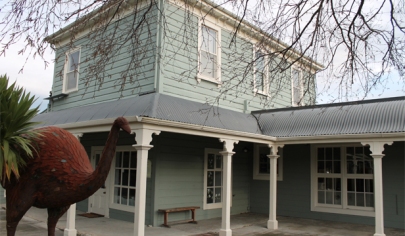 Hollywood movie director, James Cameron raised the Titanic in celluloid to great acclaim and this, his latest purchase in the Wairarapa, would indicate that he could also be here to raise a Moa or two

Breaking through the dreariness of our daily diet of parochial and enervating news that leaves us, the poor reader, wallowing in the callow reporting of the minutiae of the body politic and still ill informed about the bigger, wider world, was no mean feat, but then Mallard is a consummate politician, the Rottweiler of parliament.

Smiling sweetly, Mallard told the world he was thinking outside the box. He had a vision. He had a dream.

Stop there! You were onto a winner. Extraordinary! A thinking politician! A visionary! A dreamer! A genius who got people talking about the Labour Party finally? A man with teeth!

Duck shooting opened early. The rabble – sorry –  elected members, so very well practiced in rowdy, parliamentary point scoring primed their tongues, quickly abdicated from dealing with the weighty issues of state, lined their ducks up in a row and  rounded on Mallard. The moa was dead as a dodo in minutes.

Used to a bit of a bruising, the jibes were not unexpected: unimaginative name calling, lame references to dinosaurs, Jurassic Park analogies and a hunter’s dozen of dead duck nomenclatures applied to Mallard –  and by association to his down at the polls party.

The best suggestion came from a former minister of telecommunications who is up with the techie play and suggested Mallard get a 3D printer to make his Moa once more again.

Then there was the forever worthy PC Green Party who tweeted that rather than try to bring extinct species back, Mallard should instead be focused on saving the endangered Maui’s dolphin.

Now there’s an option while there’s still time, a will and a way to bring Maui’s dolphin back from the slippery slope to extinction. Not so for a Mallard and his Moa revival. But, I still hold high hopes for the creation and evolution of a politician who is a thinker, a dreamer, a visionary – that will see this country fly.